They were both extraordinarily generous with their time and information shared.

Prof Martin-Iverson’s research interests include neuropsychopharmacology; conditioned psychomotor stimulant effects of dopamine, cannabinoids and glucocorticoids in schizophrenia and addiction; and prepulse inhibition of the startle reflex (humans, mice and rats).

Kyran Graham’s research interests include neuropsychological mechanisms underlying the subjective experience of the self. 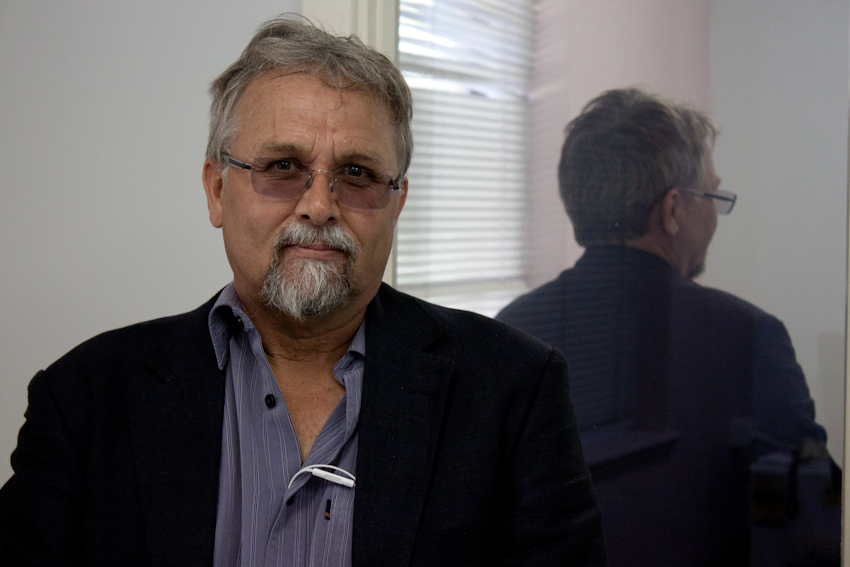 Prof Martin-Iverson and Kyran showed me how they use variations of the rubber hand illusion to identify brain mechanisms. Their work investigates schizophrenia and dexamphetamine.  They use the illusions to assist in determining which parts or processes of the brain are activated in different illusory states and which brain parts and processes are affected by the pharmacology. Their subjects are varied according to their research and include healthy control groups of various ages and gender.

One of their observations is that the strength of body illusions differs with participant age. With younger participants having a stronger illusion and a faster uptake and older participants less so. The explanation proposed is that older people have more physical experience and therefore a stronger relationship with their body schema. The same could be said for a person who has a high level of diverse physical activity compared with a person with less physical activity or sedentary lifestyle. Something for me to consider when approaching creation of experiences for various audience groups.

Kyran facilitates the virtual hand illusion quite a bit for the work he is doing and frequently experiences an immediate and very strong uptake of the illusion himself as soon as the video is on. His uptake for it has increased with exposure. The illusion he experiences is at the extent that he can feel the weight of the blinding cloth (where it isn’t) and the sounds of the tapping (in the movement agency experiment) appear to be coming from the virtual hand, 2-3 foot distance from the real. He also doesn’t experience the video lag in movement – a visual-auditory-temporal perceptive adaptation. When Kyran stops the illusion – withdraws his hand – he experiences significant numbness in the hand, like an out of hand experience.

I ask Kyran why he thinks this repeated experience strengthens rather than lessens his uptake of the illusion. He explains that combined with his youth, his “brain has increasingly “learnt” to ignore the conflicting sensory inputs (in this case proprioception) and relocate the felt position” of his hand to where he sees it.

Prof Martin-Iverson notes that it is an interesting effect that is not yet entirely clear. A student is currently investigating the effect of repeated exposure and they will soon analyse the data (2015).

They talk me through some of their set ups and evaluations that involve the Projected Hand Illusion.

There are advantages and disadvantages of the Projected Hand Illusion. Disadvantages are that it’s a 2d image where the rubber hand is 3d. Advantages are that people are currently used to seeing images of the human body and even their own body on screens so it is a more intuitive experience than a rubber hand. Also that movement can be brought into the experiment as the video image is live rather than the static rubber hand. This movement means they can experiment more with agency and ownership. The live control also means that they can make use of image feedback delay.

They use an analogue system set up as it presents least latency and an analogue delay line to be able to control delay for some experiments. Kyran is looking at passivity symptoms of schizophrenia. The experience that people with schizophrenia often report that another party is controlling their body, physical sensations or their thoughts.  So problems with self-agency. Thought to be a result of having a distorted sense of self and an in-tact sense of others.  Through the body illusion experiments, the team are considering and investigating the ways we humans think about our selves. The model proposed is that the sense of self is governed by multiple processes, both conscious and unconscious  – proprioception, body schema, body structural description,  body image, agency, ownership. 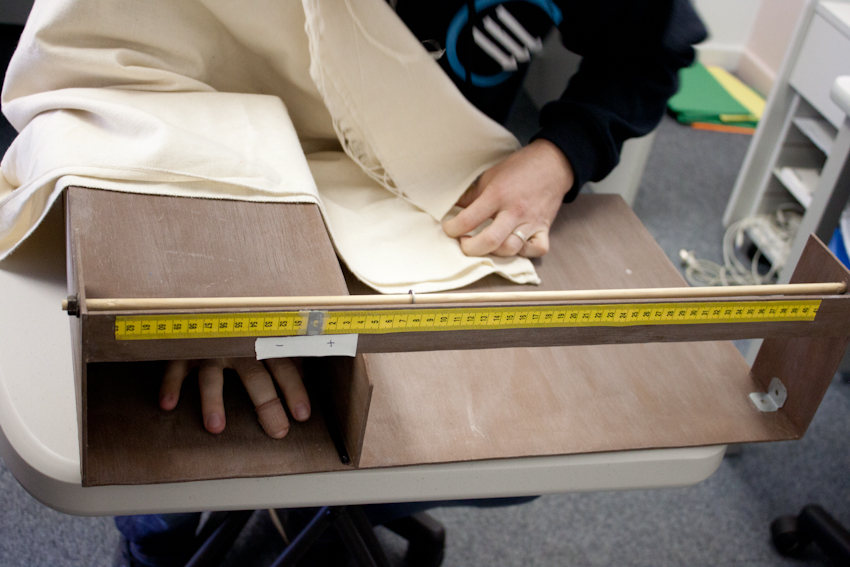 Agency experiments bring in the use of delay (video lag) in the  virtual hand and explore temporal window of associability.

They practice this agency experiment on me – with delay, without delay. I get symptoms of nausea until the lag is reduced,  perception of my hand becoming larger and a drift back and forth of my proprioceptive hand position.

At the time I met with them they were part way through data collection in a body image experiment. At the time they were observing gender differences with right side (body) bias in women and left side bias in men. Also body and body part distortion patterns with men selecting body images that are larger than the real image and women selecting hip images that are way smaller than the real image.

A related publication of interest with Kyran and Mathew as co-authors: