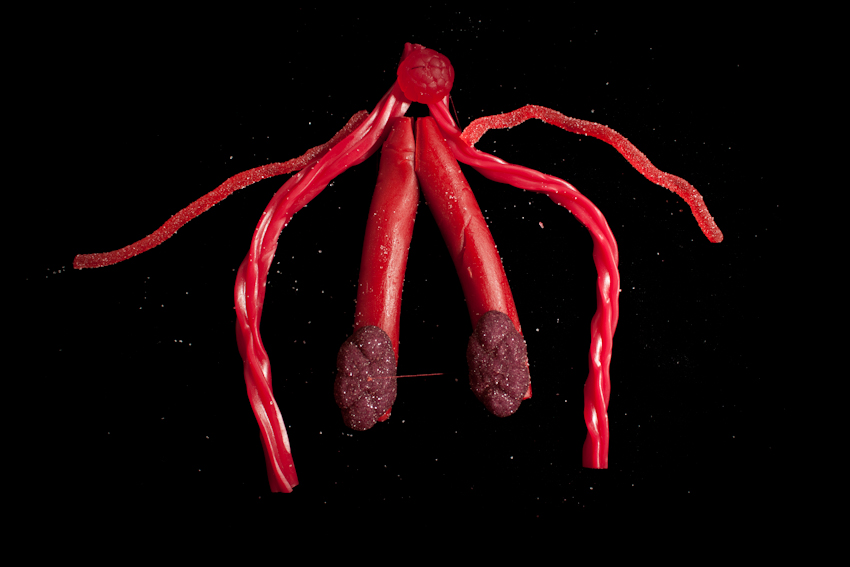 My Synapse residencies are interspersed with other artistic projects (and other research too!). One of these projects, Anatomy’s Confection is a new work made for Proximity Festival 2014 at Fremantle Art Centre. I initially thought this project and its research were on a completely different tangent to my Synapse research. However as it turns out after chatting to Jane Bowering…

Although Anatomy’s Confection doesn’t use body illusion it does employ embodiment as it’s core device. Naturally this has a strong relationship to body illusion and the chronic pain research around  body representation and body ownership.

The project’s development and content have became part of ongoing conversations between Jane Bowering at Body in Mind and myself in relation to her research into pelvic pain and more broadly in relation to embodiment and positive body representation. So I’m including a description below.

Jane Bowering is a Phd candidate at Body in Mind Uni SA. She has a background in physiotherapy. her current research project is on vulvodynia in women.

For more information about pelvic pain in men and women see the Pelvic Pain Foundation. As you will see there, the term pelvic pain is a description of many and varied conditions, highly prevalent and largely invisible.

Anatomy’s Confection is a social surgery and a labour of love, on the clitoris. It’s part installation, performance, part social action and sculpture. A curious conversation for the anatomically playful.

It brings to light (for those who don’t realise) that the full anatomy of the clitoris was censored from medical textbooks and curriculum for 150 years until 2005. Perhaps for reference take a look at the research of Helen O’connell, Australian Urologist. At the end of the front page some links to the bbc for “Time for a rethink on the clitoris” or abc’s Quantum – Body of Knowledge and another for Female Sexual Anatomy.

Anatomy’s Confection includes an act, and an affect of embodiment. This is something Jane has found of interest with relation to education and also it’s possibility in a clinical setting.

Some of Jane and my discussions have included what the bio-psycho-social affects of a censored part of the body might have on cortical reorganisation. Or the affects on sensation, and function that the use of misleading and negative language such as tiny, hard to find, difficult to achieve…might have. Likewise the observed affects of the performance experience for participants raise questions about what affect the embodiment / play in Anatomy’s Confection has on positive body representation.

Our discussion began before the final development and performance season at Proximity Festival. On my next visit I’ve been able to report back on audience responses that I’ve observed or that have been sent through as feedback.

In the experience the audience has a private appointment with me. It begins with a game and advances into an historical anatomy lesson. I ask the participant to join me in unmaking Anatomy’s Confection by making a confection of our own in the full form of the clitoris. The surgery we perform is a sculptural creation of the clitoris in soft confectionery. The materials are extraordinarily flesh like and when in large proportion for the installation form a mandala of colour and emit an intoxicating fragrance that makes people a little high and laugh uncontrollably. Sugar. When participants enter the room, their eyes pop and they start salivating. Each unique sculpture is documented. I have a growing collection that represents the diversity of human anatomy, the enduring visibility of the censored, and each person who takes this knowledge and carries it in their own hands.

The personal journey’s that I witness are as extraordinary as the sculptures that are created. One of the observed moments occurred for most people – a moment of hesitation when handed the needle and thread to stitch the sculpture. It’s this moment of hesitation that demonstrates the level of embodiment that has taken place through the act of discussion of the anatomy of the clitoris, its relativity to an individual human body, and the participant choosing and handling the pieces that will form their own anatomical confection. This hesitation was sometimes an intake of breath and a pause, sometimes a call to me to stop, sometimes a request to stop and a demand to know what the symbology of this action was truthfully or a statement that they could not proceed.

In a number of cases embodiment had gone so far as to elicit a wince on piercing of the needle, or to catalyst an unexpected entry into a verbal roleplay (not part of the performance experience!) as to  describe giving the subject an anesthetic.